As the year winds down, Maritimo plans for another huge year ahead.  We can expect to see bigger, more specialised and flexible boats for discerning owners as well as a swag of new models to be released in 2017.

Maritimo has consolidated its boat range and honed its formula in 2016. Six new 2017 releases will bring the range to six motoryachts, with the addition of the M59, as well as adding the S59 and S70 Sedan variants to what will be a six model S Series line-up.

Based on the M50,  the best seller in the motoryacht series, the  M54 has interior tweaks and finishing upgrades and an extended Fish Boat Transom option and lengthened cockpit that creates a pile more outdoor room.

The Sydney International Boat Show, opening August 3, will have the new S59 single-level Sedan variant on display. The M59 and S59 will have the base 725hp Volvo Penta D11 engine, though most are being upgraded to the 800hp variant.

A new S64 is also scheduled for release later in 2017, but it’s the new S70 that will be drawing the most attention. The flagship of the Sedan range introduces new modernised styling and vastly improved lines, at least if the drawings are anything to go by. The first boat will head to a Kiwi client. 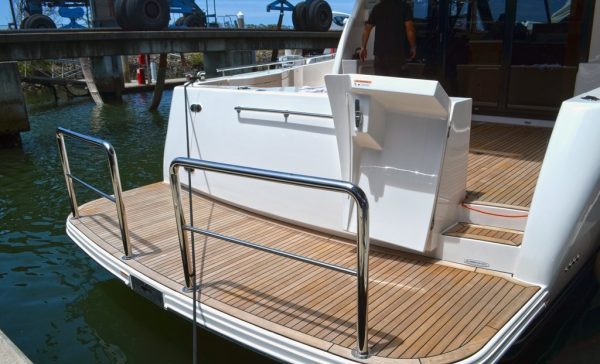 Joining the 2017 line-up of 12 Maritimo models will be the first new boat from the X Series, an X6, due to launch later in the year.

This 60-footer is based on the Elandra 53, a boutique brand that Maritimo bought in 2016, but will be reworked and renamed to better integrate the Maritimo fleet.

The signature feature of these boats will be an aft cabana in the transom that can be customised as a fourth cabin with queen bed, bar and beach club, watersports centre and more.

“It will be the Bentley of boats, long range, and is a result of extensive market research,” commented Ormonde Britton, Australian and New Zealand Sales Manager for Maritimo.

Expect to hear more from us on this top secret project in 2017.  In the meantime, contact Ormonde Britton or Spence Thorpe for more information.